Samsung C&T sentenced to a fine of 15.3 million USD for a large-scale fire at an Oil Palm Plantation in Riau, Indonesia in 2019

November 18, 2021 – On November 10, 2021, Indonesia’s Rengat District Court found PT. Gandaerah Hendana (hereinafter referred to as PT GH), a subsidiary of Samsung C&T, guilty of a violation of the Law 32 of 2009 on Protection and Environmental Management (UU No.32/2009 Perlindungan dan Pengelolaan Lingkungan Hidup) by damaging the environment due to the fire occurred in September 2019. According to the court, a fire broke out on PT GH’s concession on September 3, 2019, but there were no equipment or personnel in charge to extinguish the fire and take action. Nine days after the fire broke out, PT GH placed basic firefighting equipment and personnel only after receiving a request from the government’s Forest and Land Fire Task Force, but it was not enough. The fire was finally extinguished by heavy rain on the 24th, 21 days after the fire broke out. The court judged that PT GH’s violation of environmental damage standards was not done by simple negligence but was purposeful, citing that PT GH was aware of the consequences of failure to suppress the fire, yet did not take preventative measures. It sentenced a fine of about USD 14.7 million (8,000,000,000 IDR) for the restoration of the fire area in addition to a USD 558,000 (208,848,730,000 IDR) fine.

The fire caused a serious damage to the ecosystem of 580ha, which is double the size of yeoui- do, Korea, and local residents. Experts estimated that during the fire over 2,300 tons of greenhouse gases including 1,566 tons of carbon were emitted and that the fire also damaged the pH level, organic soil, nitrogen, water content, bulk density, and soil porosity of the area. It would cost about USD 14.7 million (208,848,730,000 IDR) to restore the area. In particular, the ecosystem of the peatland within the area was permanently damaged by fire. On the other hand, during the fire, local residents suffered from serious air pollution, which infringed the right to education of the students while schools were closed and made it difficult to carry out various activities for the local communities. Furthermore, countless people still suffer from respiratory diseases due to the smoke that occurred at the time. 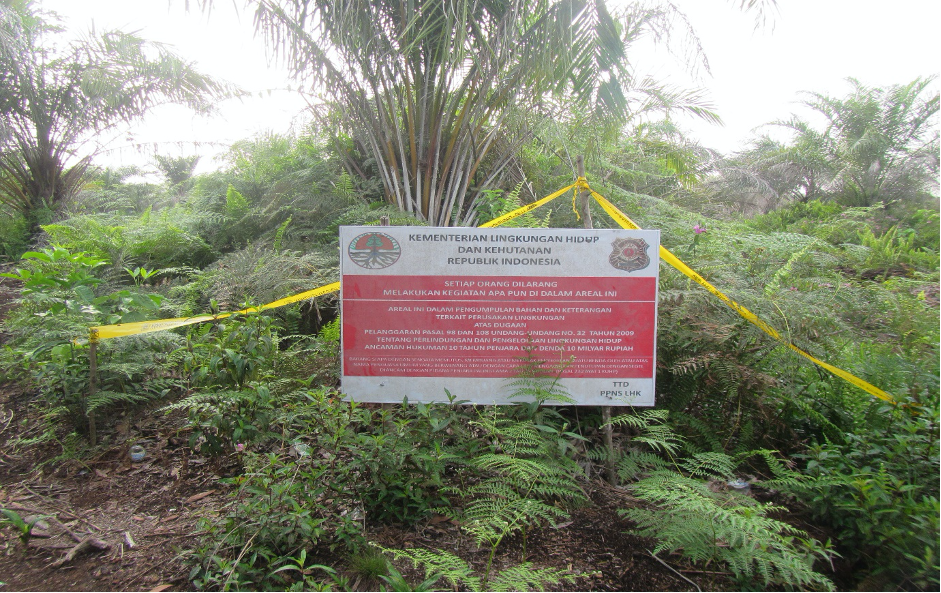 <Police sign installed by the Indragiri Hulu Police on September 1, 2019 at the location of PT Ganarea Hendana. Image was taken on November 17, 2019 ©Jikalahari>

However, despite this ruling, PT GH appealed to the Pekanbaru High Court on November 17, 2021. PT GH argued that there was no longer a need to take responsibility because it gave up the right to use (HGU) the 580ha area where the fire had broken out. The area out of concern has long been a subject of land dispute with local residents, and the residents have demanded that PT GH return the right to use the area. However, PT GH, which had been operating the plantation without responding to the demands of the local residents, gave up its right to use the area to avoid responsibility for the fire when it was indicted in December 2019 for violating environmental laws after the fire broke out. Residents are criticizing PT GH for cheating to avoid legal responsibility for the fire. However, the court admitted that PT GH was responsible for the environmental destruction caused by the fire because it had the right to use the land at the time of the fire. 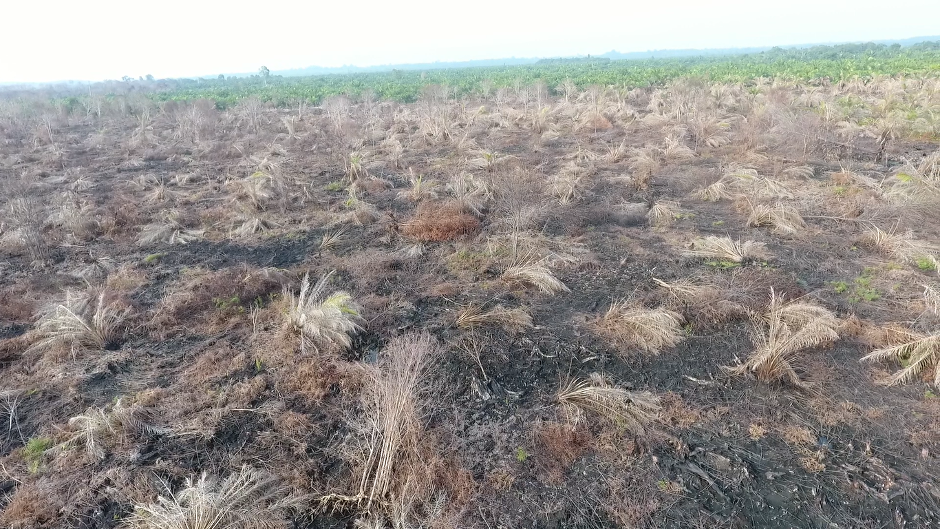 Made Ali, an activist for Indonesian forest fire monitoring NGO, Jikalahari, said, “The fire in 2019 severely damaged not only the land but also the local residents. PT GH should withdraw the appeal immediately, pay the fine, restore the damaged ecosystem, and take responsibility for the pain of those affected by forest fires.”

Kim Jong-chul, a lawyer for the Advocates for Public Interest Law, said, “We welcome the Indonesian court’s conviction against Samsung C&T’s subsidiary in Indonesia, which is responsible for the disastrous forest fire. Samsung C&T’s subsidiary in Indonesia has long ignored completely the legitimate right to use land of local residents in several of its concession. Samsung C&T should not avoid responsibility for fires under the pretext of land disputes, but should do business without infringing on the human rights of local residents, by recognizing the right to use the land in the rest of the land dispute areas.”

Kim Hye-lyn, an activist in charge of the International Solidarity of the Korea Federation for Environmental Movement said, “PT GH is eager to promote its eco-friendly image by adopting the Sustainability Certification (RSPO) and the Environmental Social Policy (NDPE). However, it is questionable whether it is being applied at the actual site. PT GH announced its NDPE policy four months before the fire broke out to promise zero-burning policy and protection of peatland, but ultimately failed to keep any of it. Samsung should now actively recover areas damaged by fires and compensate for the damages to residents in line with the various social responsibility policies and certifications it had announced.”

For more information or interview requests you can contact: